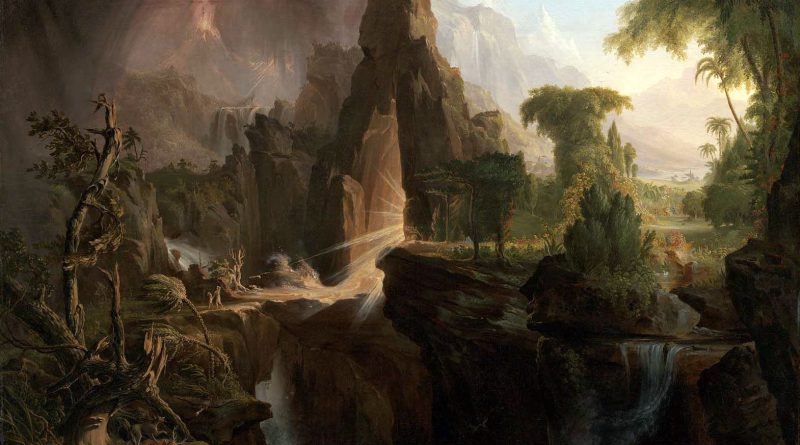 Thomas Cole, The Expulsion from the Garden of Eden. From the Wikimedia Commons

Looking back on this week’s discussions of and reactions to Denny Burk’s Scudder Lectures and the statement from Covenant Seminary president Mark Dalbey, I’m perplexed by folks who seem to fixate on the question of whether same-sex attraction or homosexual desire is sinful as though it were the decisive question in determining the legitimacy of the Spiritual Friendship project or the Revoice conference or using the adjective “gay”.

I think the question of the sinfulness of homosexual desire is a good question, and if we are talking about desire for forbidden sexual acts, I believe the answer to that question is yes. But I did not and do not see that having any bearing on how I describe my ongoing experience of being predominantly same-sex attracted or on my involvement with and support of Spiritual Friendship and Revoice.

Specifically, regarding the sinfulness of homosexual desire…

1. It is no argument against people speaking openly and publicly about their experiences and struggles where they believe that doing so would be for the good of the body of Christ and the world.

2. It is no argument against people using simple, ordinary English words (like “gay”) to describe their experiences, or whatever language they believe would best communicate the truth in a given context.

3. It is no argument against someone with an enduring experience of predisposition to homosexual desire honestly acknowledging how that impacts much of their lives, comparable to (or even more than) other ordinary components of identity like race, nationality, sex, marital status, class, disabilities, health conditions, body type, occupation, hobbies and interests, personality type, education, denominational affiliation, political values, musical taste, sports team loyalties, etc., provided they recognize that it is a fallen and temporary thing and must like all other aspects of themselves be seen as subordinate to their identity in Christ.

4. It is no argument against renewing our appreciation of the value of deep same-sex friendship as an experience of love, connection, and alleviation of the aloneness that God calls “not good”, which may be particularly valuable and necessary for those for whom marriage may be unwise given their absence of sexual desire toward the opposite sex.

5. It is no argument against encouraging predominantly same-sex attracted Christians to seek to purify their friendships by cultivating what is holy and good and mortifying what is fleshly and evil in them, provided they exercise wisdom and avoid undue temptation.

6. It is no argument against believers who are in this fight gathering to encourage one another and strengthen one another and create resources for one another, in venues like Spiritual Friendship or the Revoice conference.

7. It is no argument against partial collaboration in such endeavors with people from other Christian traditions who may not share a Reformed view of sin,  but are yet very much in the same fight with us in most if not all respects. For example, Ron Belgau (who believes that homosexual desire is not morally neutral and should be mortified but is not sin itself) and I have been mutually encouraging, edifying, exhorting, and challenging one another to greater faithfulness and holiness in this regard for many years. We do not need to share the exact same hamartiology or doctrine of sanctification (or blend our views into a hybrid) in order to do this.

8. It is no argument against carefully discerning whether there may not be any manifestations of common grace poured out on gay culture which we might learn from.

9. It is no argument against a conservative OT scholar teaching a conservative and orthodox perspective on Leviticus to repentant same-sex attracted believers who desire to be so taught, in order to better defend themselves against doubts brought to their minds by Satan and the world, and in order to better defend their commitment to a Biblical sexual ethic to the progressive church and to the world.

10. If quarrels about details of language are set aside, it is no argument against the substance of any of the workshop descriptions offered at Revoice ’18. Struggles with shame, fear, loneliness, and finding hope exist whether or not homosexual desire is sinful. (Even where some kind of shame may be appropriate, people need help distinguishing it from unhealthy shame and knowing how to respond to it well, in a way that leads to repentance and growth rather than despair.) Concerns for effective missiology when it comes to the LGBTQ+ community are valid whether or not homosexual desire is sinful. The same goes for concerns for how families, ministries, and churches can better provide support, and for explorations of how to make celibacy more livable in our culture through increased focus on community, and for examinations of how the experiences of ethnic and racial minorities with this struggle may differ.

11. It is no argument against acknowledging the plain reality that for the vast majority of believers who have been predominantly same-sex attracted since adolescence, a dedicated and faithful course of mortification and sanctification, while it greatly subdues the power of same-sex attraction to erupt into rebellious deeds, willfully nurtured lustful desires, or imaginations, does not typically remove the experience of attraction or turn it in a heterosexual direction to any noticeable degree.

4 thoughts on “The Sinfulness of Homosexual Desire Is Not an Argument against Spiritual Friendship, Revoice, or “Celibate Gays””