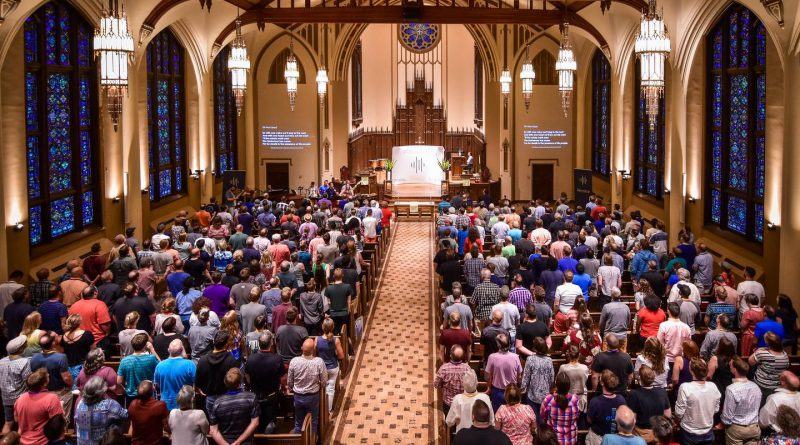 I wasn’t sure I was going to enjoy Revoice.  There were lots of things that seemed like they might skew a little too liberal for me.  I wondered about some of the workshop descriptions, and flat-out cringed at Grant’s.

I was, however, 100% committed to defending the validity of same-sex attracted Christians gathering together to encourage one another and to support one another and perhaps brainstorm together how to faithfully live out a traditional sexual ethic in our present cultural moment.  I had zero patience with any critic who could not appreciate the great value of that aim, who was going to let the perfect be the enemy of the desperately needed good, and had a similar non-existent amount of patience with those who could not fundamentally respect the seriousness of discipleship and the apparent work of the Holy Spirit in the lives of those who were turning away from their own longings for sexual and romantic fulfillment out of obedience to God.

This is why, while I shared some concerns with critics, I planted my flag where I did.  I think the question of what faithful flourishing Christian life looks like for us in this difficult cultural context is incredibly important.  The aim of support for predominantly same-sex attracted Christians, whatever they choose to call themselves, and regardless of whether all their theological “i”s are dotted and “t”s crossed, is valid and absolutely necessary.  If you cannot see this, then it’s hard for me to put much value on your professions of love.

I saw plenty of room for constructive criticism of Revoice, lots of room to say “this is a good thing but…”  But when the tone turned toward Revoice delenda est, when folks started to talk about us less like a group of fellow believers who could probably use some refinement and correction in our thinking, and more like a threat which must be combatted and eliminated, my interest in criticizing the conference vanished.  There were mistakes and errors, but all of those paled in comparison to the error of thinking that same-sex attracted believers gathering to encourage each other was a fundamentally bad thing.

As it turned out, I was impressed with so much of what I saw.  I thought the presentations, especially some of the workshops, turned out to be quite good.  The ones I was most worried about skewing heretical turned out not to.  I didn’t see people being led astray in the ways that I feared.

I loved it, I had a great time, I rejoiced.  I thanked God. I drove home with warm tingly feelings of gratitude.

I want to take a moment to reflect on why this event was so meaningful, delightful, and precious to me.

There was the richness of having gay, same-sex attracted, queer, and bisexual voices create and shape the event.  When I first looked through the general session and workshop lineups, I felt a sense of joy and pride in knowing so many of those involved, that this conference was birthed from the labors of comrades of mine, many of whom were friends I have known for years.  This was “by us” and “for us”.  We were the ones we had been waiting for.  We were no longer abjectly pleading for the church to do more, we were going to work on it ourselves and create the support we longed for.

There was the richness of so much practical, specific teaching designed for our concerns and needs.  There’s a lot of talk about how we’re all the same in terms of being sinners, and that we shouldn’t focus too much on what makes us different from other Christians.  But the truth is, there are some unique situations and aspects to this experience, and given how few and far between those of us who are living faithfully while being open about our experience are, and therefore how hard for us to connect, it’s sadly unusual to be able to learn from someone who understands the experience, and be able to discuss with those who understand the experience.  I find myself greedily devouring almost anything anyone writes on this subject, kind of like “to him who is famished, even what is bitter tastes sweet.”  When I read or listen to more general Christian teaching, I find myself working to translate and adapt.

There was the richness of a warm, unified sense of community, and a sense of shared struggle.  Probably the thing I miss most from my days attending an Exodus ministry group was singing worship to God alongside other same-sex attracted believers.  When we sing of our need, of our yearning, of our thanks, of our joy, of our hope, of our surrender-when we express all the manifold cries of our hearts toward our God, it feels to me like there is an extra layer of spiritual harmony in our voices.   The urgency, the intensity, the longing, the pain and the ecstasy of our Christian experience emerges in our praise and spreads out almost palpably over us, as something we can lay hold of, and hang onto.  Even beyond the worship, what a joy to look around and know I was looking at comrades, fellow combatants in the same good fight of faith.

There was the richness of feeling normal, in a majority, in a dominant group.  I absolutely do not advocate isolating oneself from the broader church or creating a ghetto.  (Although, if your broader church rejects you, I don’t think you have to abstain from the Christian company and fellowship that’s available to you.  The solution to “gay Christian” ghettos is not in demanding that gay Christians stop being there for each other, but for the church to reach out warmly and embrace and include and care for the needs of gay Christians.)  But sometimes it’s nice to take a vacation from feeling like an alien freak, the odd woman out. Hanging out in regular Christian women’s spaces, there are so many times I just feel so weird. I accept that as a reality of my everyday life, but it was so nice to feel something different for a few days.

There was richness in not feeling like we had to explain or defend ourselves to anyone.  Those of us who are open about our attractions in our church communities often find our attempts to do life with our church to be somewhat exhausting.  We are often policed and viewed with suspicion, treated as some dangerous, treasonous fifth column.  Many of us can’t imagine what it would be like to have the church be a help to us, we’re just hoping she might stop being a hindrance, a stumbling block under our feet and a millstone around our necks.

I realized at Revoice that I am basically crouched in a defensive posture all the time in Christian spaces, just waiting for straight Christians to “ask” me:   Don’t you think it’s a mistake to call yourself gay?   What made you this way?  Were you abused or something?  Why do you hate men?  Are you sure you can’t change?  Have you really asked God?  Have you tried this avenue of counseling/therapy/healing/repentance/discipline/deliverance?  Are you really a Christian?  Aren’t you trying to turn our church into the PCUSA?   Why don’t you say the same exact things that Rosaria Butterfield does?”

I realized I am so universally surrounded by that atmosphere that I had taken it for granted, like a fish in water, and was shocked and delighted to feel its absence. I am used to having to tenaciously fight to carve out space to follow after God faithfully, to have to prove myself to every new Christian I get to know who narrows their eyes skeptically at me.

There was the richness of its grassroots feel, such a diffusion of power, which led to a general atmosphere of empowerment.  In many workshops, the wisdom and insights of the audience were explicitly sought out, which turned out to be incredibly fruitful.  This was so inspiring, seeing how we gay/ssa believers have been so often we are made to feel invalidated, deficient, less than, perpetually immature and foolish, perpetually borderline Christians. Maturity and strength are too often associated with orientation change, marriage, and not “identifying”. It was such a joy to look around at these beloved brothers and sisters and listen to them raising their voices to offer something that they’d gleaned from their experience of seeking God’s will and striving to glorify Him with their lives.  Yes, there were more and less respected figures (hey I strove to get myself awkwardly and shyly introduced to Wes Hill for the first time just like so many other folks!)  But the rigid hierarchicalism I’d experienced in ex-gay and other Christian spaces, where there are the carefully selected and curated legitimate expert voices on the one hand, and The Masses Who Do Not Have It Together and Must Sit Silently and Receptively at the Masters’ feet on the other wasn’t there, and that felt good.

One thought on “The Riches of Revoice”