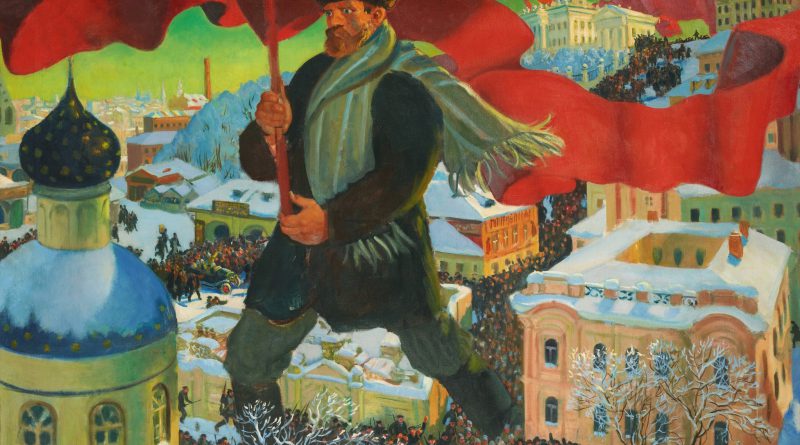 Boris Kustodiev, The Bolshevik. From the Wikimedia Commons.

It struck me that the only people I heard referring to such a movement were those who consider themselves outside of it. Can there be a movement if the alleged members do not see themselves as such?

Whether or not there is a movement, the terminology is inapt and potentially misleading, in four ways:

I think affirming theology is destructive and spiritually dangerous. I hope and pray for God’s grace for everyone, but I don’t see how to read the Bible without concluding that homosexual sex is a moral and spiritual disaster. The primary reason I confront conservative criticism is that I have watched inaccurate or unjust criticism weary, exasperate, and alienate people in a way that pushes them into the welcoming arms of the affirming church.  (Perhaps these things must come, but woe to him through whom they come.) Frankly, I believe that our lives of costly discipleship entitle us to the benefit of the doubt from other believers when it comes to our seriousness about the faith. This doesn’t mean there is no place for folks to speak truth into our lives. But it should be done humbly, with careful listening and with appreciation (not simply cursory acknowledgment) of just how much we love our Lord and how much we desire to see Him glorified in our lives and in this world.

(Maybe a suitable analogy here is that of a fundamentally orthodox missionary who has a questionable theological opinion.  Their life of courage and obedience and pouring out of themselves in love doesn’t mean that they are 100% doctrinally correct.  But it probably does mean that accusing them of not valuing the Bible’s or Christ’s authority or not even being regenerate is not the best starting point for conversation.)

Many conservative outsiders mistake Spiritual Friendship and Revoice as a halfway house or baby steps toward liberalism and “affirming” theology. But this is absolutely backwards. I desire to see same-sex attracted believers supported and encouraged in their obedience either in celibate singleness or marriage to a person of the opposite sex because I want them to stay on the narrow road, on the path of life. I worry about the doubt, discouragement, and despair engendered in many such believers by the godlessness and sexual insanity of our culture and the misunderstanding and lack of empathetic support from conservative Christians. I see churches hemorrhaging their same-sex attracted covenant children and it breaks my heart. People ask me, “How can we bring those who struggle with these issues into the church?” I say, “Before you worry about bringing “them” into your church, figure out how to support the ones that are already in the church. What you are going to do if and when the gay unbelieving friend you are talking to and praying for repents?  How is your church going to be supporting them in their walk with Christ tomorrow, next year, ten or twenty years from now, if the miraculous heterosexual transformation you’re hoping for doesn’t take place?”

Is there a movement? Surveying the landscape, I see now, as I have seen since the mid-2000s, thoughtful individuals voicing their ideas on faith and sexuality. What I don’t see is a unified movement anywhere. The things that unite those of us who are alleged to belong to this movement are simply Christian faith and a belief that God doesn’t want us engaging in homosexual sexual activity–things which are common to evangelicals and conservative Christians of all stripes.

The only thing I see setting the supposed “celibate gay identity movement” apart from other Christians is this: As long as there is agreement on basic (Nicene) Christianity, and agreement that Christian marriage is between a man and a woman, and homosexual sexual expression is not permitted, we really don’t see much else as a deal-breaker when it comes to who we are willing to talk to, work with, and learn from. I find the ecumenism both encouraging and fruitful. Despite differing views on the gay-related matters mentioned above, not to mention other, sometimes deeper differences in theology and ecclesiology, we find much of value in each others’ perspectives as we seek to work out these things.

I am grateful for this chorus of unique voices. We are in a season of exploration, not in a season of dogma, when it comes to working out the details of encouragement and discipleship for predominantly same-sex-attracted believers in our present cultural context. Nobody has it all figured out yet. We are united not so much by answers (except to the overarching answer that sex belongs in marriage, and marriage is male/female by design) but by the questions we are seeking answers to:

A lot of progressive/affirming Christians say that a traditional sexual ethic for a gay Christian is impossible, destructive, too hard. A lot of conservatives agree that living out that ethic is hard, but take a line of “Life is pain, highness. Everyone who says differently is selling something.” Something about Christian soldiers and hardship and taking up one’s cross. That’s true, but there is no reason to stop there. There are ways in which faithful gay Christians can make their lives better, not only happier but more fruitful and more glorifying to God.  And there are ways that other believers and the church as a whole can support and encourage them toward that end. (Unfortunately, a lot of things Christians and churches have been saying and doing have the opposite effect.) I see Spiritual Friendship and Revoice working toward helping faithful gay believers grow in Christian maturity, strength, and spiritual fruitfulness, and teaching churches how to nurture rather than impede that growth.

11 thoughts on “Is There a Celibate Gay Identity Movement?”